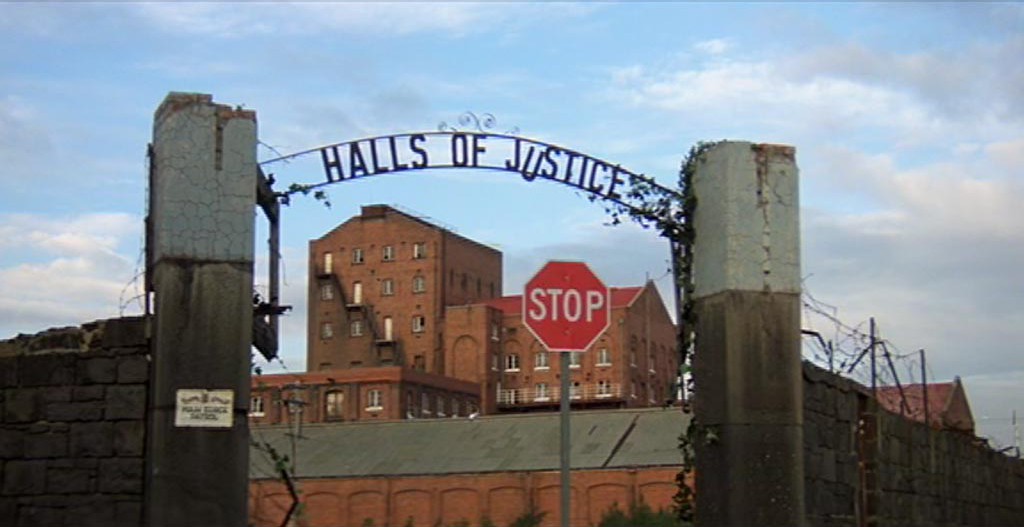 During the entirely too excessive amount of time I spent on planes yesterday, one of them offered Mad Max[1] as an in-flight movie. And I saw the summary and grumbled, because the summary ran

In a post apocalyptic world, Australian policeman Max seeks to avenge the death of his family at the hands of bestial marauding bikers. (115 min)

Mad Max, I maintain, is not a post-apocalyptic movie (and dammit, you hyphenate that when it’s an adjective). I would listen to arguments that it’s a world in the slow beginnings of an apocalypse as society crumbles into a new dark age[2], but it ain’t post-apocalyptic. There wasn’t an apocalypse.

I do think it’s part of a really identifiable sub-genre of dark dystopias that are very low science fiction (if any) and that I think tend to get lumped into SF because they’re set “technically in the future” rather than because they’re movies about the effects of a new technology. I mean, things are in the future and it’s different and bad–that’s part of what SF is, right?

(We shall now pause for a regularly scheduled observation that if all SF was was complaints about how everything was going to hell, it would not deserve its title as “the literature of ideas”. Future rants about the reactionary nature of time travel may follow.)

But these movies… you know the kind I mean, right? The setting of Mad Max is undermaintained and there’s been a decay of the social order for some unspecified reason, but that’s it. Escape from New York came out in ’81, and there really isn’t any new technology in there; a bunch of it was probably developed during World War III, but that never really comes up. Dead End Drive-In is a low-tech (and very low-budget) excuse to pen a bunch of unemployed hooligans up in a isolated parking lot and leave them there.

But I really don’t think they’re speculative fiction, and I wish I had a name for the sub-genre. I suppose they’re dystopias, or possibly just near-future dystopias, but I kind of wonder if someone else has already thought about this and come up with a better name.

(NB: Not saying the subgenre of “twenty minutes from now, it’ll be the grim dark future” is exclusively low or no SF–you can look at Rollerball, Death Race 2000, or RoboCop for counterexamples. Or Max Headroom, which is the source of the post’s title. And I have a bit to say about both Max Headroom and RoboCop, but it’s actually still 10 p.m. on my body clock and I think I need a nap, never mind all this sunshine.)
—
[1] Not Road Warrior, not Beyond Thunderdome, not Fury Road, just Mad Max.
[2] The distinction between apocalypse and societal decline is interesting, and one that I suspect largely has to do with framing and speed. (Possibly enhanced by weapons of mass destruction. I suspect that a society that crumbles without anyone having the potential to fire off nukes is going to do so rather more gracefully than a society with said potential, insofar as such processes can be called graceful.)