Two weeks ago, I was trying to prepare for not having a dog at Hallowe’en.

Now, she is sitting next to the couch, staring happily up at me as I scritch her neck around the Elizabethan collar. (This is the plastic cone of shame a pet gets after surgery, to be clear, not part of a seasonal costume.)

A quiet night before NaNoWriMo starts is in order, and I am glad. 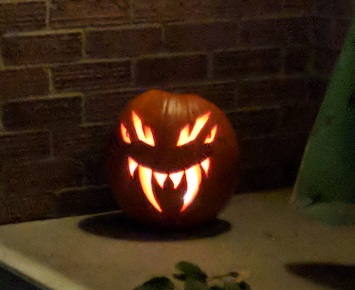 The latter half of the month has been a bit much, but rather than focussing on that I’m going to note the positive.

First, it’s October, which is always a good month. A surprising number of the neighbours put up their decorations on the 2nd, and when I walk to the bus stop for work I’ve been walking past tombstones and skeletons and grasping decomposing hands and one disturbingly large and green plastic Slimer and cobwebs and–

Look, even the more restrained houses have hay bales. It’s a very enthusiastic neighbourhood this year.

I finally got a chance to sit down and rewatch Trick ‘r Treat, and that was comfortably reassuring as always. I usually try to watch something seasonal in October, and that was the first chance I had. (Speaking of which, a YouTube channel called CineFix did a list of the top 5 horror movies of all time once you eliminate all the famous ones, and it seems pretty solid–there are a couple in there I haven’t seen, and I think I should catch them.)

I also got a few sketches done for Inktober. Nowhere near close to one a day, but it was good to sit down when I could and scribble something out in twenty-odd minutes.

And finally, I got a couple more stories into a state fit to send out, so I’ve started collecting even more rejections; I’m pretty sure I’m on track to make fifty submissions this year.

I had a bad few months, for writing. I didn’t realize it until I looked back at some conversations I was having, and matched them up with my record of when I was writing and when I stopped writing nearly so much.

I got into a discussion where– ugh, short summary, someone insisted very loudly that the only thing about your writing (as opposed to circumstances like connections or time) that mattered for acceptance and publication was how skilled you were. If you were a skilled writer, all you needed was the right checklist of manageable circumstances, and you’d get published.

(I honestly don’t buy this; at the very least, the most beautifully written work isn’t going to get accepted by a publisher who does not publish That Kind Of Thing.)

I was trying to articulate that–the difference between skill and appeal–when they announced the discussion was over. And I spent some time… dwelling on it.

It was not great. I wrote a little bit over the next few months–the Clarion West Write-a-thon was hugely helpful for that–but my word count honestly tanked relative to what it had been before. I know part of it was the trip to WorldCon. I know part of it was a work crunch. But I looked back and realized that I’d written for nineteen days straight before that discussion, including through a family member’s wedding, and I wrote for one day out of the entire week after it.

(They seemed so certain that my rejections were all due to my lack of skill. I had all the other circumstances they listed, after all, so it had to be that my writing was bad. Right?)

I don’t deal with that person anymore–our entire interaction was based around discussions of writing, and I figured out that discussing writing with them was a bad idea for me–but it took a while to get moving again. I think I’ve managed, finally. My word count is picking up again, the streaks are getting longer, I’ve been completing work instead of drafting disjointed scenes and never going back.

But good grief, I wish I’d been spared that unilateral diagnosis in the first place.