There’s this thing I do sometimes–towards the end of the month, usually.  I mean, not every month, but the end of the month is when it’s most likely to happen.  Needing to buy something expensive can do it.  Putting money in the bank can do it, especially if I’m anxious and paying attention to how much the amount goes up by.

Anyway.  This thing is the thing where you start figuring out exactly how much money you have and how long you could manage for if there was absolutely no more income.  I had to go pick up my meds and I spent a dozen minutes wandering around the groceries section of the drug store[1] figuring how much I could get in the way of groceries if I cashed in all my rewards points.  (The chain has a pretty standard spend-money-get-points-redeem-points thing going.)

I have no idea why I was doing this math.  Things are fine, I know this, and even when I’m thinking about it I’m not worrying.  It’s more just a very very absorbing problem, like a Sudoku with addition.

—
[1] Always makes me think of the description of the drug superstore in Stephen King’s “The Sun Dog”.  Household goods and widgets and toiletries and food and cleaning supplies and toys and candy and way at the back, the pharmacy.  Because it is still technically a drug store.

We have been sitting in the doctor’s office for an hour and five minutes now. It is boring. For the record.

Apparently we’re next in line, but I don’t know when that line is next moving forward. For the moment, this is largely a chance to practice typing on Swype.

There is one bonus; there is some kind of pseudo-Scrooge romcom movie playing on the waiting room, and John has said that he takes back everything bad he has ever said about my taste in the movies he watches with me.

And as soon as he starts editorializing on the movie, a get called in. Onwards! 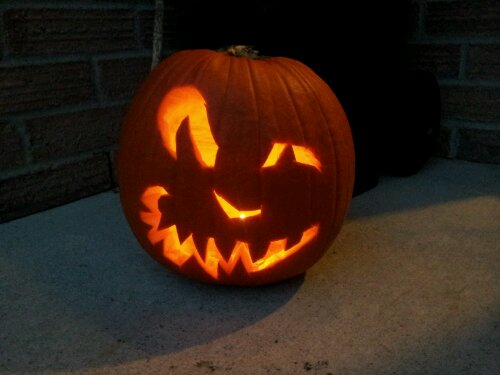 The day gets away from you. Still, for a 40 minute carving job, I am pleased.

Yeah.  Just realized tomorrow’s Hallowe’en–not that I’d forgotten, but it keeps slipping my mind.  I’m not exactly getting into the spirit of the season this year.

We’ve picked up candy for trick-or-treaters; I’m hoping we actually get a decent number coming by this year.  Last year there were some, but not a lot.  And John called when he was doing the groceries to ask if I wanted a pumpkin, and I said yes on impulse, so we’ll at least have a jack o’lantern.  (I am not sure if I’m going to carve a face or try for one of the pictures that people do sometimes.  Probably a face.  That seems easier.)

Maybe I’ll make popcorn and make a movie night out of it.  I’ve started watching Bedlam and The Fades; I like Bedlam better，but it’s early days.  I can’t really do that with anyone, though–John’ll watch some stuff with me, but has pointed out lately that he is really not a big horror fan, and TV shows tend to have lower budgets[1] than movies.  So I’d basically be watching them alone and maybe talking to people online, but needing to look at the screen tends to cut down on how good the shows are.

…man, looking at this, I sound kind of down.  I feel kinda down.  Trying to keep an eye on that.  It gets lonely out here sometimes, and the not-working isn’t helping.

—
[1] Actually, he said lower budget and worse acting.  I dispute this.

Didn’t get a lot done today, but it was nice to spend time with John.  Went out to dinner this evening and then picked up the cat, and it’s really great to have him back.  Unfortunately, he’s annoying the other cat, and it’s really not tenable.  She was happy without him around.  Now she’s on top of the cupboard again.  I’ve shut him in the bathroom, but it’s not exactly a long-term solution.

We can’t–it’d be miserable, giving Angus away.  And it’s not fair to Abby like this.  Maybe we can find some way to split them up in terms of which floor they’re on.  I don’t know; it’s late and I’m tired and I can tell I’m at that point where my focus is just stretching out and nothing is getting done.  Meant to go to bed a couple of hours ago, and then we smelt smoke, and that is just not a relaxing event.  We spent a quarter-hour trying to figure out where the hell it was coming from.  (It turned out that a giant housefly got trapped under the lightbulb of one of the lamps, and when we turned the light off, the smoke smell started really spreading.  Rather like when you blow out a scented candle, and the scent’s very strong for a bit, because the particles are wafting around spreading instead of being burnt up.)

All of this to say I’m tired.  More tomorrow; want to discuss ghosts as handled in American Horror Story.

Wow.  Missed two days, there.  Not feeling great about that, but carrying on.

Made it home, and not feeling quite as satisfied about that as I might expect.  The place feels… well, it’s mine, and that’s good.  But it feels much less comfortable than some of the places we stayed.  I know that hotels are designed to be comfortable[1], so there’s an edge there, but this place feels like it’s not ready to be lived in yet.

We picked up a painting in a little homestyle restaurant the other day–yesterday, in fact.  It’s all warm gold and brown tones, a country road and a cloudy sky, an oil painting that was up on the wall for sale.  I’ve hung it up, and it seems to help a bit.  Looking around now (not anywhere I can see the painting in question), the walls seem pretty bare.

Maybe reorganizing a little will help.  I don’t know.  We don’t spend a lot of time in the living room; our offices are on different floors.  I know it’s different coming home, but it definitely seems easier to spend time away from each other with the layout here.

Something to think about, I guess.  Probably when the coming-home melancholy wears off.

—
[1] And they all had these amazing pillows.  I mean really big pouffy cuddly pillows. I miss them.

Definitely coming down with something.  It might just be something that’s a reaction to being so far south of my usual stomping grounds, but it’s something.  Am regularly coughing up a little muck in the mornings, and I hate that.

Lete’s see, thoughts… alright.  Discussing, recently, TV series that ended properly (weren’t cancelled, felt like they came to a natural resting place) and movies that ended with the end of the world.  Movies set after the end of the world–that is, movies which are presented not only as happening in a resource-poor high-danger wasteland but happening after everything was destroyed to produce this wasteland–are a lot more common.  For ones which actually end with the end of the world, the only ones coming to mind right now is 12 Monkeys, Dawn and Day of the Dead, and Return of the Living Dead (seriously, watch it).

I’m not sure why the reluctance to produce such things.  Most of the movies that depict a setting which could result in the end of the world aren’t ones which are likely to have a sequel anyway, so it’s not as if they’re being avoided out of fear of murdering franchise potential.

(Oh, Terminator 3!  I forgot that one.  And would sort of like to go on forgetting it, actually, but it counts.)

End of the world movies are a downer, yes, but that doesn’t make them bad.  Movies (in terms of pacing and complexity) tend to resemble short stories, and there are a lot of short stories that end with the end of the world.  So why, relatively speaking, are there so many fewer movies that go that route?  Harder to make?  Less likely to be popular?  And is that last veering towards the snobbery of insisting hoi polloi can’t possibly appreciate a good apocalyptic tale?