(Sorry, the phrase has been stuck in my head for a while. Specifically related to petrichor, actually.)

I made dinner, tonight. I also made glue. Unfortunately, the two overlapped.

There was a particular time I was aiming to have dinner ready for, and since I had a little time in advance, I figured I’d get everything ready to cook ahead of time. (I understand people who do not make the kind of mistakes I made call this a mise en place.) So I measured out the appropriate amount of chives, mixed the broth and spices, measured out the butter and left it to soften in a cat-free zone at room temperature so it’d melt faster, and chopped and floured the chicken.

The error, in retrospect, should have been obvious.

When you add flour to cubed raw chicken, you are (besides creating something that always makes me think of Turkish Delight) adding flour to moisture and creating a paste.

As I am reminded anew every time I make bread dough, there is a reason flour paste is used as glue.

Oh well. It delayed dinner a bit, but the end result was good, and the leftovers are already boxed for meals for later, so yay. (They are also already boxed because it vastly reduces the odds that I will go for seconds, which is always a tempting danger with a dish that has a lemon/butter/salt/garlic sauce, I am just saying.)

Well, the number of books in the intersection of “owned” and “to read” on GoodReads is staying fairly steady. I was kind of hoping to get it down to double digits by the end of this year, but that is currently looking pretty unlikely. (If I can get it down to 120, I will be well pleased. 125 seems more realistic.)

There was some cleaning today – not hugely in-depth stuff, more the “hum, this counter/shelftop has not been stripped completely bare and wiped down in a while” kind of thing. (I think, in my mind, “hugely in-depth” involves either moving furniture or breaking out Products Only Used For Cleaning (vs a damp sponge/cloth).)

My sleep schedule is completely off; I woke up around noon today. The sore throat that was threatening to appear around the start of the weekend isn’t in evidence, at least, but today has felt like fighting my way uphill during the Great Molasses Flood to get anything done.

I finished the second hat I’m knitting to donate to a local school, but I think it’s too small. Will speak to one of the people who actually works there and check.

I’m sort of ashamed to admit I didn’t realize until mid-late morning that it was Friday the 13th.

It’s been a bit of a long week.  Upsides include finishing with the current batch of documents at work, apparently rather more quickly than expected, and the light of my life bringing home sushi for dinner.  Downsides include possibly coming down with something, and a crick in my neck from falling asleep on the couch.

Unwinding with ginger-pepper tea (no, seriously, it’s very soothing, although I think it’s technically an infusion because there isn’t actually any tea in it) and a watching of Deathtrap – it was that or Trick ‘R Treat, and I’ve seen the latter really recently.  (I was also considering Oscar, but it’s not on the computer, and since there is a cat very imperiously sitting on me, I did not want to deal with getting up to fiddle with the DVD player.) Michael Caine having a conniption fit is sort of adorable.

Placed an order with the local book store for a copy of This Strange Way of Dying while I was running around yesterday, so am looking forward to that.

(Not much to say, really: I think this is just a slightly wordy “Yay, time to sleep!” at heart.)

I have had a kind of upsetting day, and am finally getting a chance to relax. Part of this is putting a familiar movie on, specifically Trick ‘r Treat, a sort of adorable little Hallowe’en portmanteau[1] movie which I am just now feeling really weird about calling adorable because I started adding up the number of people who die in this thing (after getting lines, even!) and it is in the double digits, even if you only count ones who get lines. 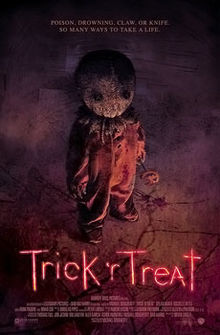 (I have included a picture of the movie’s mascot in my post!  Look how cute he is.)

I mentioned this to the light of my life, in terms of how it struck me as odd that this kind of movie would be relaxing. Part of it is the familiarity, sure, but it’s not like I’m putting on Threads[2] to relax. Or even Splinter, which is actually a really good movie. Either of those would be weird.  And he pointed out a couple of things:

First, I like short stories. I like anthologies. This usually only comes up with books, possibly because there is a sort of terrible lack of movies that do this (I can think of a handful, sure, but they are in a definite minority), and no TV shows that do it to my knowledge.  Getting different distinct stories with the same presenter is not the same; you only get one story per episode, still, and then the media slice is over and you are done for the nonce.  Tales from the Crypt is adorable in its way, and it’s an anthology series, but the individual episodes are not anthologies.

Second (speaking of TftC), short stories within movies are overwhelmingly of the “bad things happen to bad people” genre, and given what I’ve been dealing with today, that connotes a universe with a moral framework and an active justice that it is kind of reassuring to see.  I think it was Eric Burns who, speaking of the classic pulp protagonists–the Shadow and the Spider?–said that he wanted to see horror turned against evil instead of for evil.

It’s a very comforting kind of story, and that is nice right now.
—
[1] I was going to say “frame story”, but I really don’t think there’s a single surrounding frame story.  Instead, there are at least four stories (I usually count five) weaving in and out of each other.
[2] A BBC movie about the aftermath of nuclear war which is about the most appallingly bleak thing I have seen in… uhm, actually, in ever.  There are more depressing or upsetting movies, but I have not seen any others which leave me feeling so throughly that the universe does not care and humans are just clinging sadly to a worldful of tired gritty dust that will not care one whit when we are gone.

Missed this when it came out a year and a half ago – a new superglue that bonds at the molecular level, prompted by analysis of flesh-eating bacteria.

It contrasts particularly with some of the chemical screening assessments I’ve been looking at lately. The most upsetting of those cited an experiment testing a chemical compound’s toxicity, in which one of the dogs being steadily poisoned lasted for for nine hundred and ninety days before dying.

Please accept my assertion that those were not a healthy, pain-free nine hundred and ninety days, and let us move on.  (If possessed of pets, you may wish to have a small time-out in which to cuddle one or pet one of them for comfort. I am doing this thing.  I am also rambling all over the place.)

END_OF_DOCUMENT_TOKEN_TO_BE_REPLACED

The stuff I tend to read has certain common qualities, and that’s fine. (I occasionally make deliberate efforts to mix it up, which I suspect helps. Although I do continue to bemoan the lack of an anti-recommendation button on any sites I frequent–you know, “absolutely no-one who has read the stuff you read has also read this popular book” or something.)

The stuff I read also has a certain common look, which occasionally perplexes me. I mean, if you look at my Goodreads widget, down in the lower right-hand corner (which I have for the moment switched from “currently reading” to “read”), there’s a bit of visual sameness. Black, red, and grey or blue-grey, mostly, with the occasional touches of yellow (hi, Elmore Leonard) or sickly green (either Scottish crime or Cthulhu). Killshot and Joyland are the brightest things I’ve finished lately, and they’re both pitched in a very classic-pulp-pop-crime style. (Joyland isn’t that at all – I would call it literary adventure ghost story if I had to call it something – but that’s not what the cover says.)

In the absence of a particular craving, am sorely tempted to determine the next book I pick up out of the ones I have on hand by colour of cover. Something bright or cheerful or at least atypical. (Possibilities include the nigh-solid lilac of Provender Gleed[1], the cheerfully bright green of The Manual of Detection, or the Northern Lights-evoking blue-and-purple-and-white of Tales from Earthsea.)

Do you read in patterns? How do you break out of them?
—
[1] By James Lovegrove; at this point, I feel compelled to once again mention that his novel Days is a brilliant work, absolutely worth reading.

I got my copy of Tales of Jack the Ripper today. I stopped by the mailbox on my way out to grab a fluffy coffee, and there was a giant padded envelope in it, and I was gleeful (what with recognizing the return address, and knowing what it was).  So I took it along with me, thinking I would sit down with it over the aforementioned fluffy coffee[1] and read a little.

I ordered my coffee, and opened up the envelope, and discovered there was a small lump in it, in addition to the book.  I was standing up against the serving counter to stay out of people’s way, so rather than step back to have room to peer down into the envelope, I just reached in and pulled it out.

I kind of wish I’d had a camera to catch the look on my own face. END_OF_DOCUMENT_TOKEN_TO_BE_REPLACED

My cat is sleeping on me. This makes me feel useful.

We went to visit friends for the Labour Day weekend. The travel there was pretty painful, but once we arrived, the event was actually really nice; a lot more people them I’m used to seeing at once for a lot longer than I’m used to hanging out. I was a little worried I’d burn out (or be horribly unwelcome after the first few hours), but neither happened.

(As a tangent: in and around Detroit, diners are called “coneys” or “coney islands”. I find myself oddly delighted by this.)

However, yesterday and today (and possibly tomorrow, creeping on its dusty path from day to day, as it is after midnight) have been a little vacant. I’m getting things done, but these things are trending more heavily towards the “maintenance duties” end of the spectrum than towards the “active interest” end of it.

(I am also reading a fair bit. Reading is good. It is not all I want to do.)

I am staying up too late and running myself into a dully tired state, and that needs to stop. I think a couple of days of strict scheduling may be in order.