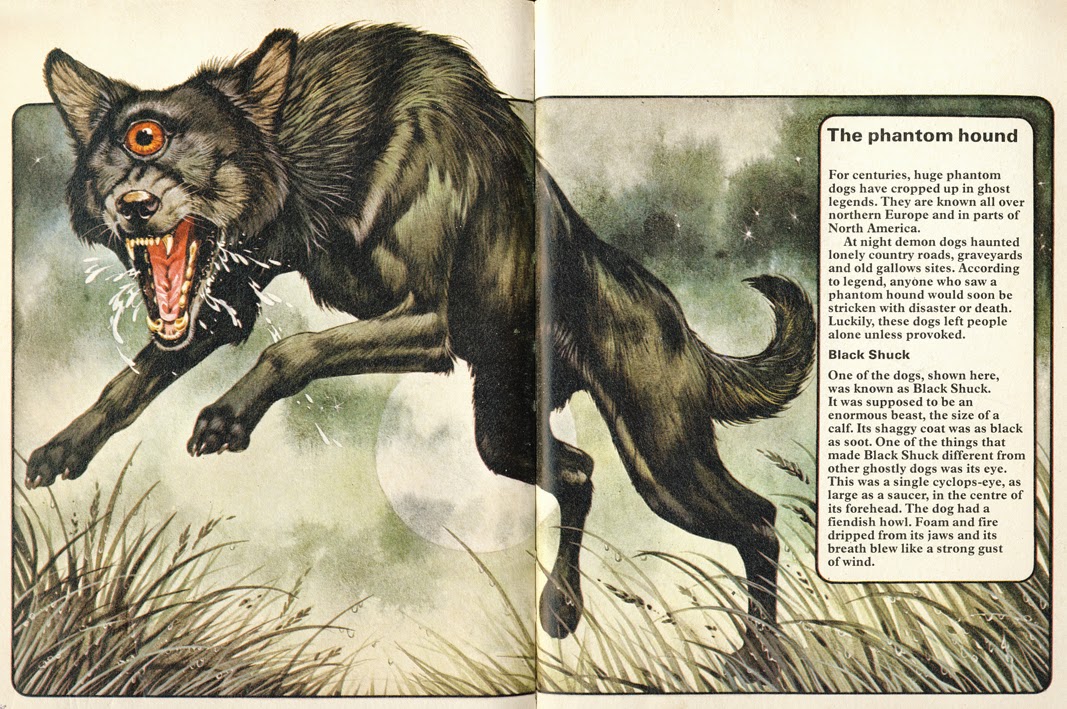 It’s kind of interesting, how many times black canids show up associated with death, and specifically the transition/boundary of death.

Off the top of my head, you’ve got Anubis who embalmed the dead and guided souls to the afterlife. You’ve also got Cerberus, guarding the gates of the land of the dead.[1] But my favourite image in this regard–where my brain goes quickest, and what makes me smile–is Black Shuck. Black Shuck is an East Anglian creature of folklore; he’s a harbinger of death, and seeing him means you’re probably going to die soon.

Surprisingly enough, despite the less-than-friendly demeanour depicted in the image above, the stories mostly don’t seem to mean “soon” as in “as soon as he chews your leg off”. More of a “as soon as you have time for the full horror to sink in and to tell a few people” thing.

(That picture, by the way, is one I ran across around age six. I think I promptly adopted Black Shuck as the most awesome imaginary friend ever. You can do that kind of thing, when you’re six.)

To tangent briefly: the term Black Dog to refer to depression–as in the Black Dog Institute, or the “I had a black dog” animated video–was drawn from Churchill’s references to his bad moods as “a black dog on my back” (something akin to “getting up on the wrong side of the bed”), a colloquialism that also refers back to the black dogs of folklore.

I suspect black dogs have mostly been on my mind, however, because I recently reread Bob Leman’s “Loob“–in which the Goster County dogs are not friendly, not approachable, but ultimately a signifier that things may return to an idealised order, and are described as follows:

…almost a distinct breed, huge rangy dogs with blunt muzzles and smooth black pelts, who stood baleful guard over the farms of the county and patrolled the streets of the town with a forbidding, proprietary air.

It kinda fits.
—
[1] As to Norse mythology: I’m honestly not sure if Fenrir fits this mould or not. Canid, yes; associated with death, yes if you count the end of the world as a death; black, I really could not tell you. Garmr is a blood-stained watchdog that guards the gates of Hel, but again: could be lilac for all I know.[2]
[2] Probably isn’t lilac.

Funnily enough, I used this for a post title nearly two years ago, too.  It’s a line from Stephen King’s Christine, which I have been thinking about rereading lately.

Anyway.  I’ve been thinking about Kyle Murchison Booth, a character from an interlinked series of stories written by Sarah Monette (many of which were collected in The Bone Key.  I love the stories very much–they remind me of MR James–and I am just quietly amused that two fairly significant things didn’t occur to me on the first read-through.

(This may be a side-effect of going through them with great enthusiasm, and therefore great speed.)

First, the past is never kind to Booth (I think he may have actually been called Cousin Kyle in one of the stories, and I still can’t imagine doing it; he is Booth, to me, or Kyle Murchison Booth, but not Kyle).  No-one who knew him from before, or who knew of him from before, ever seeks him out to do him good.  There is Radcliffe, who is specifically a break with the patterns of the past, and did not go looking for Booth, and is very nearly still cruel to him anyway.

Second–and this is one the light of my life pointed out to me–the Samuel Mather Parrington Museum is not a safe place.  It is haunted.  But it is safe from other haunts.  They may chase Booth, and they may press against the outside of his window, and they may wait for him at the bottom of its stairs… but they do not go into the Parrington.

Whatever walks there, walks alone.

I had a couple of over-enthusiastic book purchases this year, and my number of owned-but-utterly-unread books is edging uncomfortably close to triple-digits.  (In fact, I think it might be over triple digits, but I am not checking at the moment; the list of eighty-six is quite unnerving enough without entering the books from one particular bookcase.)

(The list was actually at eighty-nine as of April 30.)

In light of this, I’m making a serious effort to read what I own.  I liked them enough to buy them, and as flip as I may occasionally be about this, that’s not a casual thing.  And an untouched book strikes me as a horribly sad thing.

I just finished Terry Lamsley’s Conference with the Dead yesterday. I discovered I’d read a couple of them before–this isn’t atypical, I’ve read horror anthologies and magazines for a couple of decades, and it’s actually getting a bit hard for me to find an anthology or collection that doesn’t have something I’ve read before. Still, it was long enough ago that I decided it was worth a reread.

His writing seems quite plain–not in a bad way, but plain in the way M.R. James is quiet. The later stories in the book are slightly weirder; there’s the same calm explanation as always, it’s just relating how reality is doing a quiet little fever-dream melt and slip. They never quite end up portraying the misunderstandings of a character as reality, though–it’s something I associate very much with Ramsey Campbell, and with him writing the introduction, I was a bit anxious about the possibility.

(Please understand; I like Campbell’s writing, but I’d settled into the quiet ghost story mood of he collection, and I don’t think the style would have fit.)

Sitting down to watch episode eleven of AHS, and the psychic has just explained about the draw of the house.  The words “paramagnetic force” and “physics” were involved.  And…

I don’t think I have ever heard a more mood-breaking description of the dry-cell battery of evil.  And I have heard some really bad ones.  (And read them, but for the sake of the discussion, those are also covered in this complaint.)  It was …embarrassing.  And the description of the Roanoke colony, and the banishment curse, and… gah. END_OF_DOCUMENT_TOKEN_TO_BE_REPLACED

Alright.  Caught episodes 7 and 8 of American Horror story a couple of days ago, and taken together I’m actually really annoyed with the way the story is going.  My reasons are split up into a couple of posts, just because the rant about one particular issue was getting a bit long. END_OF_DOCUMENT_TOKEN_TO_BE_REPLACED

Yesterday I was up until four in the morning. And then I was up and functional by eight. Somehow I’m still not tired. Admittedly there was a nap in there, but…

One of the people I write with a fair bit of the time is doing NaNoWriMo. It’s rough going so far (mind, that doesn’t mean much yet), but she’s doing it. I, meanwhile, have written the hundred words of fiction in trip fragments this week.

I mean, it’s just been Hallowe’en; I practically feel guilty about not trying. It’s the time of year for (proper Lovecraft) ghouls and curiously meaningful scratches and shapes standing in the dark in the still of your room and just watching you.

You can’t see their eyes, after all.

(Oh yes, this is absolutely going to help me get to sleep. Because I needed a chaser after reading a third of the way through the House of Fear anthology. It’s a nice mix; part actual ghosts and part haunted houses (which are subtly different, but I fear I repeat myself), with a side order of the weird.)

Beginning to get sleepy, at least.  The nice thing about the phone is that I can post in my room and don’t get distracted by the joys of the internet or the horror of the Sierra Madre. Much easier to lie down and go to sleep if you don’t need to tear yourself away from a computer motor.

(That’s the Sierra Madre from Fallout: New Vegas – Dead Money. Which is a quite well-done little horror story set in a haunted house… one which both corrupts its victims and is inhabited by ghosts, now that I think of it.)

Tomorrow I’ll try and get my books sorted, I suppose. And maybe I’ll hear back about work. The estimated start date just keeps creeping forward; at this point I’d be surprised if anything happened before Monday.

Rewatched the first episode of American Horror Story as part of highly delicate TV negotiations (to wit, John’s desire to see the end of the season of The Shield is stronger than my desire to watch the next episode (now next two episodes) of AHS[1], and I’m not watching it when I have the TV alone because he’s interested in it. END_OF_DOCUMENT_TOKEN_TO_BE_REPLACED

Dammit.  Thoughts are all over the place, and I need to be up in five hours.  Some very sketchy jottings on ghosts as handled in American Horror Story. Spoilers follow. END_OF_DOCUMENT_TOKEN_TO_BE_REPLACED