This is slightly belated, because I got the news and then came down with something icky, but:

“Ink, and Breath, and Spring” (initially published in issue 40 of Lady Churchill’s Rosebud Wristlet and reprinted in episode 637 of PodCastle) will be appearing in The Year’s Best Science Fiction and Fantasy, 2020. I’m in the TOC and everything. 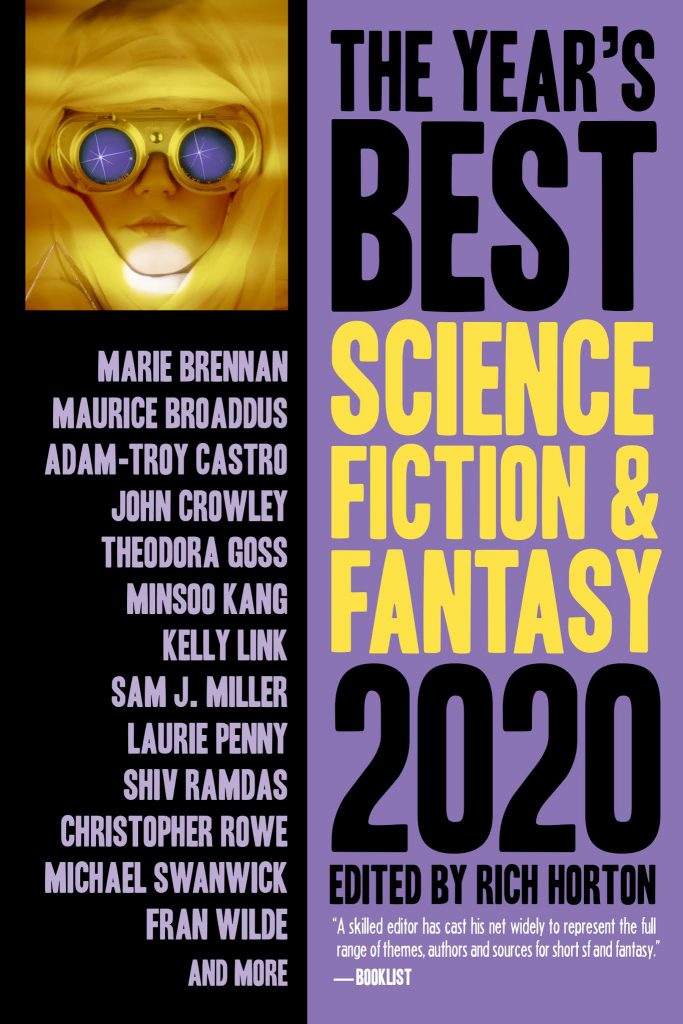 I am over the moon.

My story “Mechanical Connection” is out now in the inaugural issue of Cossmass Infinities, which is available from a plethora of sources here. (Seriously, I count four even if you lump all the Amazons together.) I got my copy this morning, and it’s a pretty fantastic issue; I hope you enjoy my contribution, the story of a superhero who is more comfortable with machines than people.

My story “The Smell of Antiseptic” is available now in issue 25 of Pulp Literature; the print and ebook copies can be purchased here, although the ebooks don’t unlock until January 1. It’s my story about ghosts and animal experimentation, inspired by some documents I ran across a reference to several jobs back.

(The prices are in Canadian, by the way, in case it makes a difference.)

Should you pick it up, I hope you like it.

My story “Ink, and Breath, and Spring” is available now in issue 40 of Lady Churchill’s Rosebud Wristlet. It’s available in print or ebook format, and you can read my tale of a dead body found in a rather odd library alongside a beautiful collection of other works.

I am honestly very pleased that this story has found a home (and what a home). I hope you like it.

Three questions with Cortesa Singh, resistance member of Bradbury Weeps and asteroid belter, survivor of the Oort Line on 2311.04.17, when the Chorister fleet swept towards earth. Interview recorded at the Silton Repository on Dirt.

Where were you from?

The belt. Parents planned against a kid but the pills didn’t work, and they wouldn’t sign me over to MarsCorp. Started flying our mining skiff–the Stendahl’s Promise–at fifteen. Wasn’t legal, but we fixed the pilot logs, clocked enough hours to start paying down the company debt.

Lost my leg and dad died in a space grit shower. Other belters got us back but the Promise needed repairs. My cousin Orsina fixed our maintenance logs so MarsCorp couldn’t deny the death benefit. Patched the Promise up, shared what we could with those who got us home.

Old Earth writer, before space flight. Told stories that ended with Earth gone and Mars being where we moved past the worst of what people did to each other.

You seen MarsCorp? All us little lights out in the black and they’re sucking us dry on contracts and margins.

So MarsCorp probes got lost and their systems broke and their scales weighed heavy and paid out extra and we’d share it round.

We were close to getting caught, when the war started.

How did you experience the war?

War, hah. Was a leaking massacre. Scrappy little ships what couldn’t cross a galaxy on the Oort Line, and what came for us–

Orsina and me stripped the Promise down to fuel and power, clad on extra armour, swapped scanners for weapons. I flew, she was gunner. Got through a Chorister hull, but half our weapons were blown clean off. Rest stopped firing.

We weren’t getting back anyway.

She used a medkit sedative.

Woke up too late.

People talk about Earth and Mars. Not about what it was like out in the black, after. Tatters of the Line stretching all the way to the belt.

Understand it. Known her since we were too young to work. If we’d have been dying over nothing, fine, but…

Haven’t seen Orsina since I dropped her on the Calabrese. Don’t know if she’s on Dirt or off on a Permancer ship or what. Haven’t checked.

Got nothing to say to her, now.

What are you doing now?

Fixing shit. *chuckles* Haven’t had time to take Promise off-world since I got here.

Dirt’s pretty easy. You can breathe free, step outside free… even water’s free, just leave enough for others. So much give here.

Sloppy or unlucky can kill you, but the belt taught me a lot that’s useful. Sinkhole at Jadoc? My filter masks kept the kids breathing long enough to get fished out. Webster flood? I welded the bridge that held. It’s not just scrabbling. It’s building.

We’ve got a chance here. Something new, like Bradbury dreamed we could be on Mars. Fleet’s holding on. Dirt’s building up. Kids from the sinkhole’re doing okay.

Sure they meant well. Only.

Have dreams myself sometimes.

After the War is a science-fiction tabletop roleplaying game of memetic horror by Jason Pitre and Alasdair Stuart. Ten years have passed since the end of the galactic war, and now we rebuild our new home on this alien frontier world. The Kickstarter is over, but soon you will be able to tell your own stories on Dirt.

My story “Late Night at the Low Road Diner” is available now in issue 5 of Liminal Stories. It can be read online for free here (although if you’d like to support them, they’re on Patreon).

A small story on the care and feeding of strange things that may come into a diner at night.

I am really pleased with this one. My thanks to Shannon Peavey and Kelly Sandoval for the acceptance and the editing (much as I love “tatterdemalion”, I have to admit it just didn’t fit), and to N.G. Lancaster for the art.

My short story “Playing Prometheus” has been published at Persistent Visions! It can be read online here. And the art for it is absolutely gorgeous; I am deeply grateful to Dana Martin.

(Please note: there is a content warning at the top of the story.)

I’ve noticed that a lot of time travel stories suggest that good results only come of preserving the past, or of making changes by accident. “Playing Prometheus” is my attempt to engage with that.

I hope you enjoy it; I’ve done my best.

May was… long. I will speak no more of it than I already have.

The latest On Spec Magazine has been published, and contains my short story “Gannet Girl”; you can also get an electronic version of the issue here.

Gannets do not love humans, but they can see eye to eye with them. It’s a matter of some import.

(And in other news, the No Shit, There I Was… anthology funded, and I signed the contract and received payment; backers will get their copies, and then the book’ll be available to the general public.)

The anthology The Weird Wild West has been published, and my short story “Abishag Mary” is in it! You can read the opening of my story at this post on the eSpecBooks website (which has other excerpts as well); the anthology as a whole is for sale on Amazon, and a physical copy should be coming soon.

“Abishag Mary” is the story of a pirate who starts out stuck in New Mexico, rather to her own surprise.

My short story “Five Drinks in Siltown” has been published! It’s in issue 8 of Betwixt Magazine, which means it is free to be read online, and may also be purchased in electronic (Amazon and not-Amazon options!) or physical format.

Joy Crelin was great to deal with, and the magazine is lovely, and I am very pleased to be in it.

“Five Drinks in Siltown” is a post-apocalyptic short-short setting piece; again, it’s work-safe. It’s the second publication of any of my accepted stories, which is both very exciting and a bit stunning, since it’s coming within eight days of my first publication.

(I am given to understand this rate of acceptance is not typical. I am prepared for statistical norms to reassert themselves.)

I feel a bit odd saying this again so soon, but it’s true: I hope you like it.

(ETA: updated to link to story, as the current issue link has moved on. 🙂 Do highly recommend reading the magazine!)